Any visitor to Barnard’s Farm for a Trike day can be certain that there will have been changes since the previous visits (of which there have been four), and this particular occasion was no different, with some very significant upgrades to the track and improvements to the race schedule. It was only five months since the last trike event here, yet the change was remarkable; it was still the same 287m grit surfaced course, but the newly-named ‘Horsfield Straight’ had been substantially widened and the boundary cleared of potential hazards, and the re-christened ‘Brexit Corner’ had been extended and cambered so that a fast entry was more safely navigated but the exit and railway crossing was tricky (does this ring a bell?), and required concentration. Nothing had been done to impact the character and appeal of the track, but the experience has been very significantly enhanced. 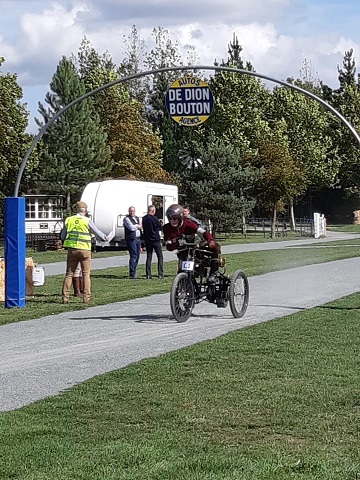 Participants and spectators were here to have fun, but in safety, so the ‘onlookers’ area and the footpath crossing were clearly delineated, and the ‘prohibited’ areas were definitely out of bounds. Trikes were required to pass muster with the scrutineers, a De Dion bouton pattern handlebar ‘make and break’ was compulsory, riders had to be crash-helmeted and tagged, and the new racing rules were there in writing, read out, and the marshals were present around the track, equipped with a myriad of flags, to make sure that all was as it should be. 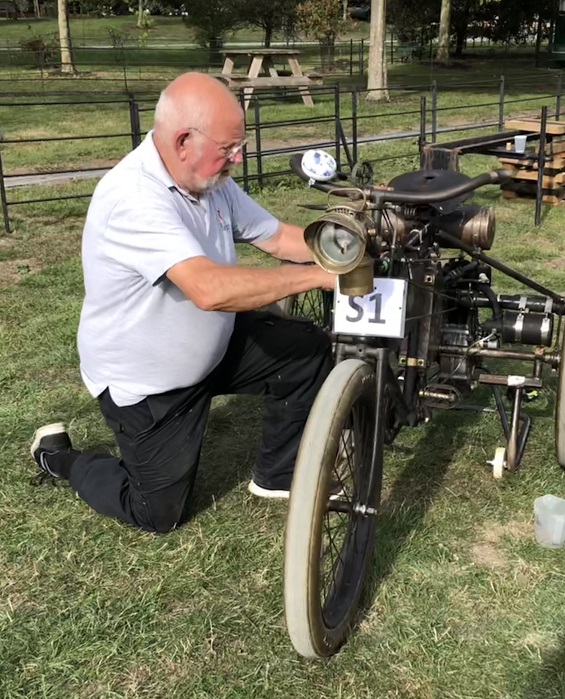 The individual events at the meeting were designed to ensure that everyone had the opportunity to put their racing skills to the test, have fun, and be comfortable. The races were over 4 laps (1km), with 2 laps for relay races, and competitors could start with the engine running, get a push or, demonstrate their fitness by going for the pedal start (few did!). Those riders new to Barnards Farm and, in some cases, new to trike racing, had the opportunity to practice before taking part in the novice races. There were heats for tricycle and quadricycles, and finals for the fastest and slowest competitors, there were relay races, and quadricycle events with passengers. 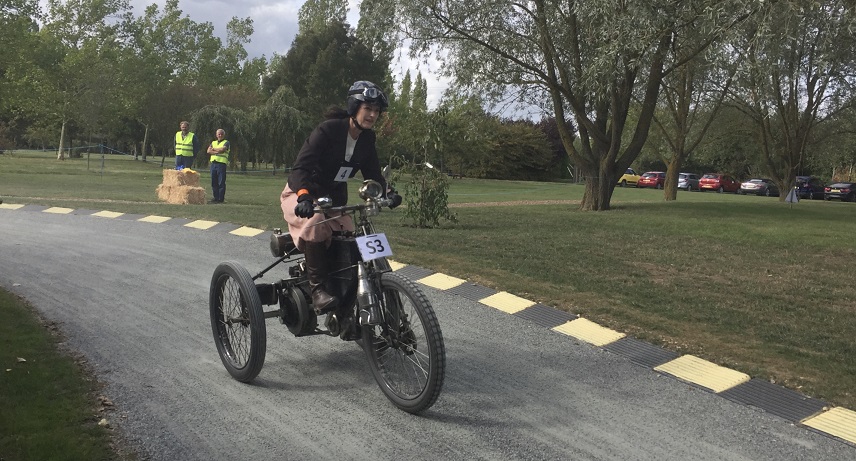 Overtaking on a tricycle can be challenging: unlike car or motorcycle racing, getting the front of your tricycle through a gap does not guarantee that the substantially wider rear end is going to follow suit. This does not apply to quadricycles, of course, and Bernard Holmes showed everyone a clean pair of heels on the Perfecta machine. One of the novel approaches tested on the day, to ensure that the competitive urges were satisfied in the safest way, was to start vehicles at different places on the track, and have the riders pursue the tricycle or quadricycle in front. If this meant that spectators were not always sure who was gaining most ground or leading the race, then that gave it the authentic feel of a race at any recognised motor racing circuit. 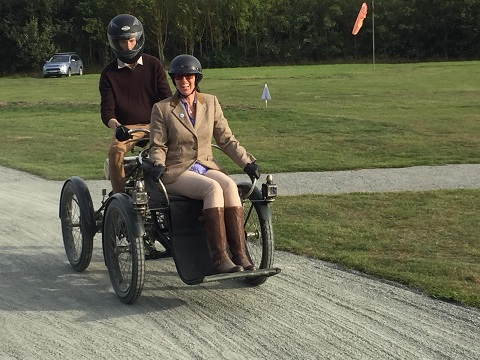 Speed was not the only challenge for the riders, however, and the difficulties of tricycle control were brought home to riders and spectators alike by the slow race – travelling 70 metres in the slowest possible time. The tricycle had to be in gear at all times (which, of course, was the only option for the direct drive machines) and the riders were frantically adjusting their carburettor and ignition controls to dilute the vehicle’s performance – a concept that was entirely alien to everything an experienced tricycle rider has ever striven to achieve. It is perhaps telling that the winner of the ‘Slow Race’, Callum Mate, was possibly the least experienced person at the event, although he was no slouch, having comfortably won the novice race as well. Steering accuracy was well and truly tested on the slalom course, where machines were required to navigate around cones on their way around the track – Clive Pettit and Bernard Holmes triumphed in this event, and there was a slight suspicion that Bernard had put in a fair amount of practice beforehand. 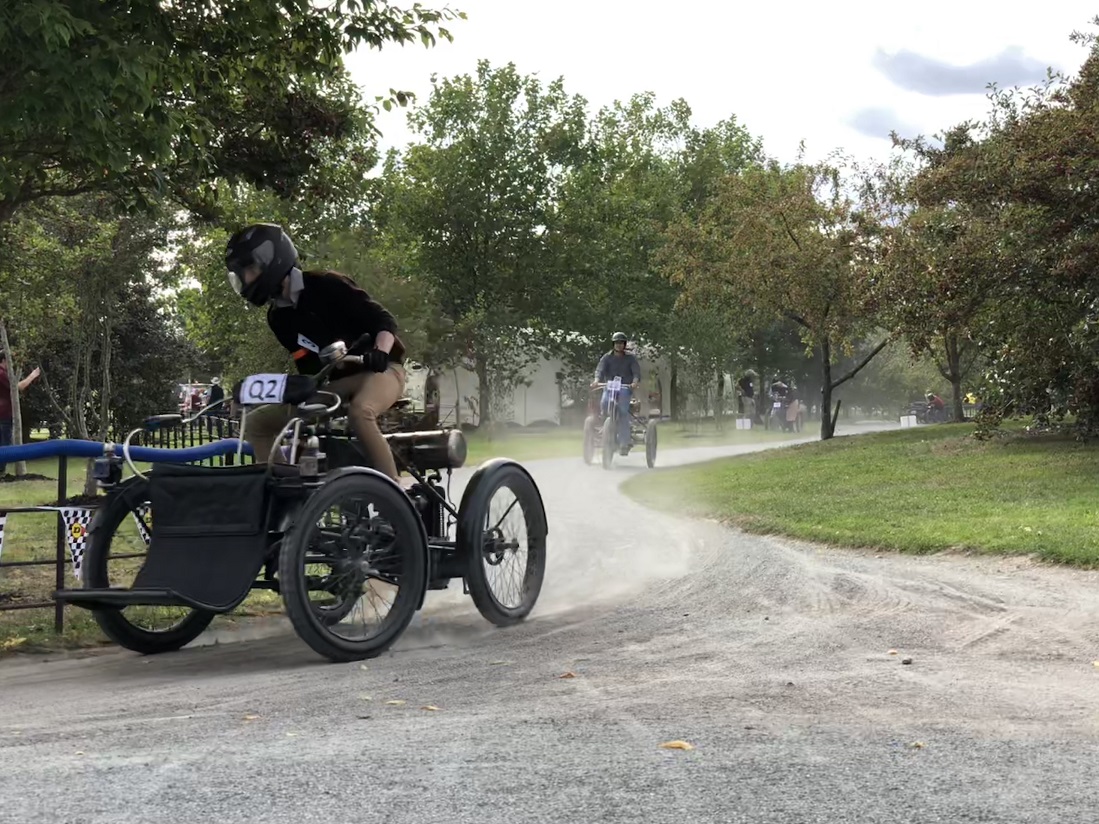 To have such glorious weather in mid-September was never predictable, but it seems to have followed the pattern of DDBUK Club events throughout this year, where the sun has always shone and everyone has had a good day out.  For spectators, Barnards Farm is as much of a treat as it is for the competitors, with the opportunity to take advantage of the improved viewing areas, and during any ‘down time’ there are the gardens and sculpture to explore, either on foot or by train (services left at 1pm and 1.30pm). 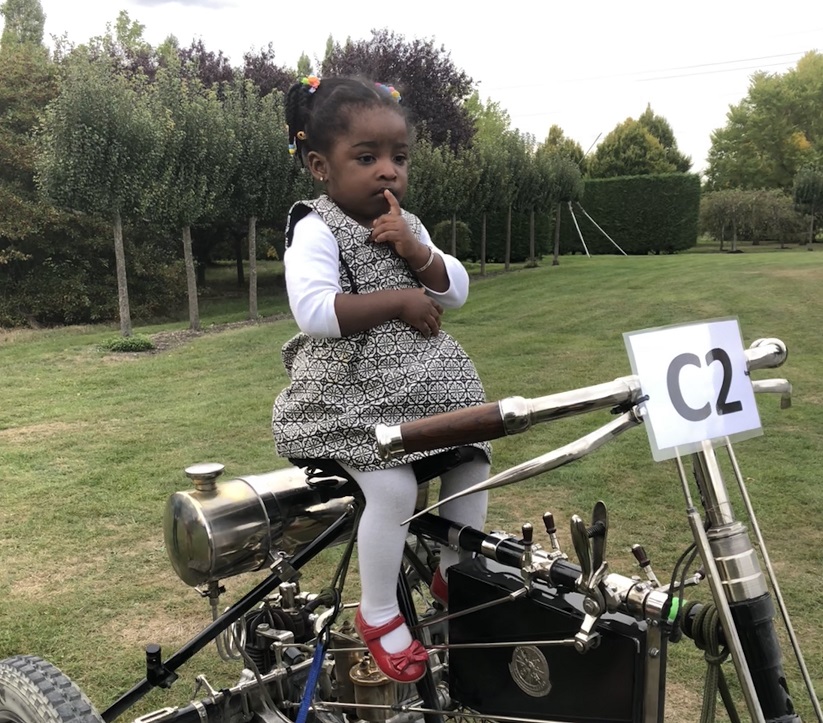 There is much discussion in veteran motoring circles about the best way to attract younger people to the movement and inject some fresh blood to keep clubs alive. A day spent at Barnard’s Farm offers food for thought: a well-organised event on private land with a broad range of competitive activity (not all about being first past the post), plenty of new faces in the crowd and out on the track, the opportunity for young people to ride a vehicle and get instruction from a few ‘old hands’ and, of course, conscientious hosts like Bernard and Sylvia Holmes and the team of people present who ensured that everyone had a thoroughly enjoyable day.

The results of the day: