I took my first BSA bicycle apart at the age of eleven and at school I was banned by the housemaster from running a cycle repair and sales business. The next term I took an Austin 10 apart as a member of the School Motor Club. We youngsters actually started it again, and drove it with a body made out of Lab worktop benches. I later became Chairman of the Motor Club!! 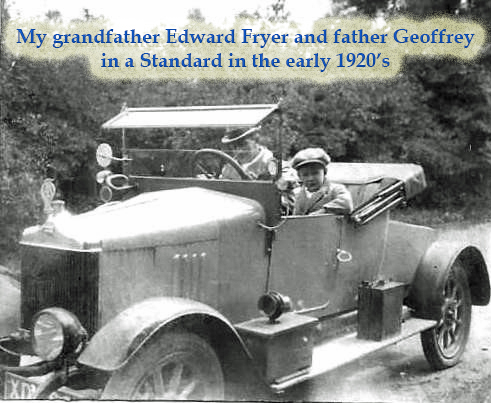 Association joining them in 1910 from the then Motor Union Association where he was secretary. Truly a pioneer motorist becoming Chief Executive (Secretary in those days) of the A.A. in 1942 until he died in 1949. My father was a Lt. Col in the RAOC and joined the AA as Regional Manager for the Midlands and we lived in Birmingham where needless to say we always had Austin cars. My maternal French Grandfather and Great grandfather Louise Vignon had in the 1890’s a Leon Bolleé, a 3 wheeler – with a basket in the front; so motoring and cars are firmly in the family blood!

By age 16, I had a Cyclemaster moped, which I used illicitly at school on nearby farm tracks; followed by a £10 Zundapp Scooter. I then joined the Territorial Army R.E.M.E. TA at age 17. I soon had a Truck and Land Rover driving licence (paid for by the Army). By eighteen I had joined AEC as a Student Apprentice and had the most interesting engineering and managerial training at Southall for the next four years. The daily commute was in a series of Austin Sevens and finally in a hot Austin Healey Sprite Mk 1, followed by a MGB roadster. I had a Truck drivers HGV licence by 21 and was driving AEC Matadors, Militants and Mammoth Majors during the week and Scammell REME recovery trucks at the weekend! 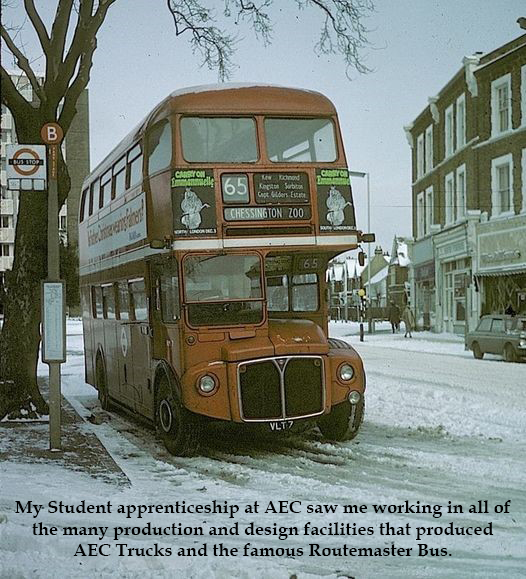 Routemasters as well as Mammoth Majors and military trucks. The then Leyland motor Corporation was the largest Commercial Vehicle Producer in the world. I spent twenty years with AEC & B-L and travelled to most countries in Africa and lived in Accra, Ghana for seven years where I collected quite a lot of cars! I went to Ghana for 7 weeks and stayed seven years; happily married to Christine as finished there as Production Director and Sales director for AEC and Albion trucks, Leyland Buses and Scammell Trailers.

The MG TC was followed by a 1926 Morris Cowley, (found under a tin roof at Accra Legon University), then a XK120 roadster in nine boxes of bits (from a line of five attempted restorations). Another £100 purchase, a year to rebuild the XK120 and I then bought her back to the U.K.

Christine and I were married in 1972 in Accra and returned to the UK in 1977 with daughter Marianne and several of the cars and a yacht! By 1980 and with a family of five and travelling a lot; there was less time for restorations. I did however buy another dark blue Austin 7 (Box type 1931) for the daily commute to B-L International at the London HQ.
When the Fryer teenagers started driving, I bought and restored for them a Morris 1000. By this time I was working as Export Sales Director for a Unilever company travelling throughout Europe and the USA. After the Morris Minor came another MGB restoration and this was followed in succession by a Hotchkiss AM2 then a 3 litre six cylinder AM80 Tourer with a Gurney Nutting body and finally I collected parts from about five Hotchkiss AM2’s and built a Gurney Nutting replica.
I was in my third career change by now as Engineering and Procurement Director for Europe for the American Ryder Truck Rental Inc. who had at that time 160,000 trucks worldwide. A busy job but I worked away on the Hotchkiss cars! I left Ryder in 2000 and went to work for Mercedes Benz as an export consultant. I then set up my own Truck Export business mainly selling Mercedes Trucks to the markets in Africa - which I knew, pretty well! I am still active, but not at the volumes of five years ago, but I still enjoy seeing my overseas customers in Southern Africa.

The AM2 Saloon and the AM2 Replica Tourer based on a  Gurney Nutting , These Hotchkiss cars took Christine and me to France many times. I still have the AM80 and have recently overhauled the clutch with Shaun’s help and fitted a new Tonneau cover. 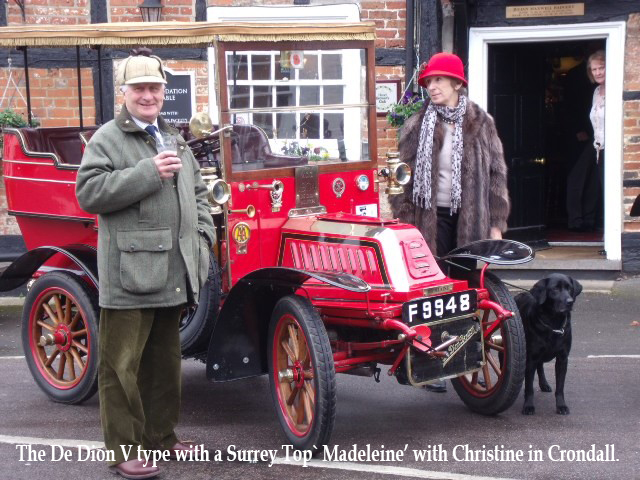 So to veterans, I bought the 1904 De Dion V type 8 h.p. rear entrance tonneau with Surrey Top called `Madeleine’ nine years ago now. I really enjoy the change of technology, intrigued as ever by those early engineers and Mon. Bouton’s brilliant designs.

The next project was a Trike, a `static’ exhibit bought from a museum in Holland as a De Dion – (it was not!), it was a Phebus with a De Dion Engine and after I rebuilt it I managed to reach Brighton on the second attempt. I took part in two Trike Meets at Dunsfold and the first Brooklands Trike Event. Latterly the Phebus with the carburation sorted raced very well.
After that I bought a DDB 8 hp Generator engine on its original DDB stand and renovated that, running it last year - after 70 years?
I have made many friends in the De Dion Bouton Club UK and have found a wealth of expertise.

Six years ago I joined the committee and developed over the subsequent years, the Clubs’ regalia, organised a Rally in Tregier and accepted the Hon secretary’s position earlier this year.

What challenge next?  Maybe an Edwardian car or another Trike, who knows? If it comes out of a Barn or in pieces (or in boxes) so much the better! 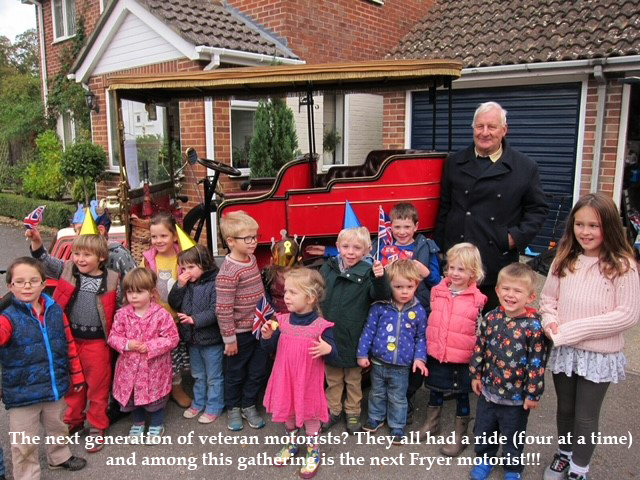 READ ALL NEWS
Apr 18 2021 De Dion Bouton restoration project with a question about the This article was earlier published in the PreWarCar.com magazine. Paul Weeks sent us a message in which he told us about his 1919 De Dion Bouton Pa. . . Read more >
Apr 06 2021 New video added to Team Jarrott page A new video is added to the Team Jarrott page about the Dunsfold Tricycle Races in 2014. Recreating the very first motor races in Britain on circa . . . Read more >
Mar 22 2021 Secrets of the Transport Museum Club member, Roger Horsfield, who has been a volunteer at the Brooklands Museum for a number of years, is one of the people who is taking viewers thro. . . Read more >