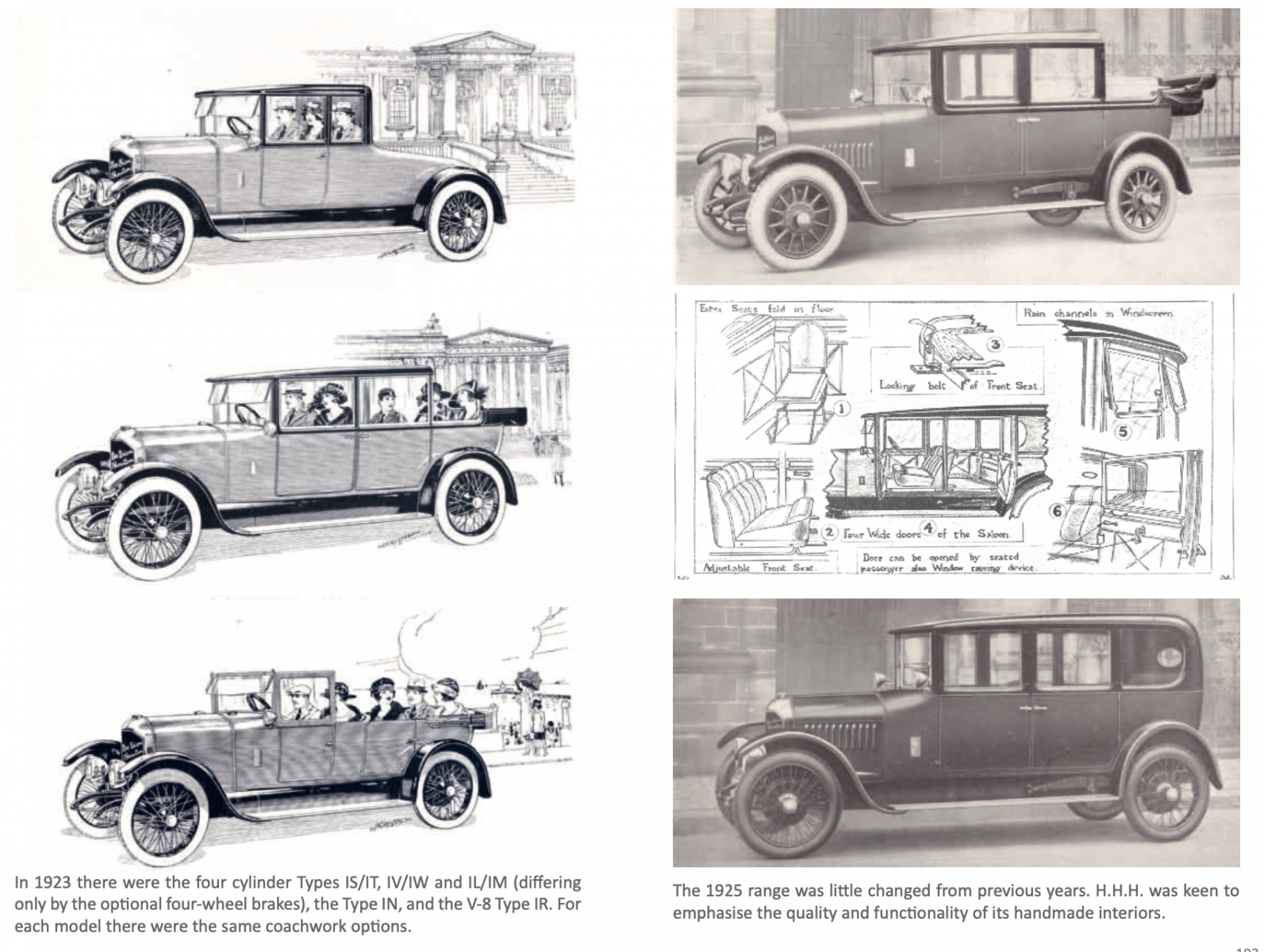 The decision was taken in 1919 to manufacture four new Types: two with four cylinder engines and two with eight cylinder power units; each engine had a new bore and stroke configuration. There was stubborn resistance to reviving any of the smaller-engined pre-war vehicles. At a time of considerable economic hardship in the country when incomes were constrained and consumables of any kind were difficult to find, especially fuel, the company had on offer a product that was premium priced and, with only one Type, the IC, whose engine had less than a three-litre capacity, expensive to run.

And yet, by this time enough V-8s had been made to iron out any teething problems, and the press response was extremely positive, praise was offered in The Autocar for the engine’s smooth running, and The Motor referred to “a wonderful little engine”, that was “a beautiful piece of engineering workmanship, perfect in every sense”. Much was made in the English press of the decision to make the vehicles almost completely in one factory.

There was a significant level of continuity in the technical specifications of the cars in the early 1920s, and while it may have appeared that there was a wide range of vehicles to choose from, in reality there were no more than two core options for each of the four cylinder and eight cylinder chassis. In 1921, there were two of the four cylinder vehicles in the French catalogues, but only one (the Type ID) was offered and promoted in the pages of the British magazines. Similarly, there were two V-8 models made in Puteaux, but it was the larger Type HG version that was mentioned in Britain. In the following year, 1922, the Type ID was available in Britain but not in France. By this time, the British company had established a division called “H.H.H.”, whose function was to manufacture coachwork for imported chassis. The strategy was clear: import finished chassis from Puteaux at the best price, and gain extra margin by adding high quality English bodies locally. At a time when the finished, English-bodied tourer was ready for sale, its price was £795, rather more than the £660 purchase price for the French equivalent.
In 1964, Bill Boddy, editor of Motor Sport, interviewed P.S. Kempster, the half-brother of H.W. Hillman, the post-war managing director of the British agency. He reported that the London office employed a ‘tester’ who worked full time in Puteaux to ensure that the bare chassis that were despatched to Great Britain were the ones with engines and back axles that made the least noise, which perhaps is an indication that general quality control in Paris was not of the highest order. When the selected chassis arrived in London “it was given a thorough check-over and a road-test of 80 to 160km (50 to 100 miles) with test body. .... The Woodside Works employed some 800 people and all the English De Dion bodies.... were built therein. The customer could have seats and squabs made to measure, seasoned timber was used, and panelling was of hand-beaten aluminium, welded so that no joints were visible. Upholstery was in Bedford cord or Connolly hide to choice, using the company’s own type of copper-coil mattress. Body and dashboard were rubber insulated from the chassis... Much use was made of felt padding. The range of coachwork was formidable. For example, the 1925 range embraced an all-weather torpedo, in dickey-seat and tourer form, a wood-pillar coupe?, an all-enclosed coupe?, a saloon landaulette, a 4-door saloon, a limousine-landaulette, a saloon cabriolet, a Pullman saloon and a Pullman-landaulette. Prices ranged from £530 for a 12/24 IS two-seater to £1,050 for a 22/65 JK Pullman-landaulette.”

This tale demonstrates that whatever truth there was in the consensus of pedestrian performance for the post-war cars, to which the English-made bodies no doubt made a significant contribution, no corners were cut in delivering quality coachwork and careful preparation. Further, there was a significant level of cooperation between Puteaux and London: Kempster relayed to Boddy the story that he “helped to cure the timing-gear rattle on the Model IM, 15/43 engine with a simple form of brake on the magneto- drive, and subsequently this was installed on future cars made in Puteaux”. This supports the perspective that Bird outlined in his book on the De Dion Bouton company, where he commented that the 1920s market was split between those manufacturers who produced vehicles where close attention to detail was expected by a select clientele, who purchased, regardless of cost, and those firms that produced in the largest possible numbers at the smallest possible price. He summarised that “[De Dion Bouton] could not bring themselves to make their cars down to a price, nor had they the means to do so, and in continuing with the sort of solid, good finish they had offered pre-war (when labour costs were so much lower) they forgot that the great mass of newcomers to motoring had no experience of pre-war quality. Cast bronze carburettor bodies and heavy- gauge burnished copper induction pipes meant little to a new generation who were used to die-cast zinc and thin drawn-steel tube”.

The year 1923 was notable for De Dion Bouton because it discontinued the production of all the previous passenger Types, although a close examination of the specifications indicates that the changes were modest with the exception of the adoption of overhead valves to replace the side valves in some units. The De Dion Bouton cars were becoming more conventional: the De Dion rear axle and the pedal decelerator had gone, and four-speed gearboxes, alloy pistons and Michelin disc detachable wheels arrived. On the other hand, the pre-war characteristics of fixed cylinder heads, gear- driven camshafts and foot transmission brakes persisted. Standardisation across the four cylinder range became key, with three chassis and three engine options. The last V-8 (the Type IR) was announced at a time when, after almost 14 years of inactivity, some French competitors, including Panhard & Levassor and Talbot-Darracq, were beginning to promote their own versions, presumably to provide an alternative to the Cadillac option that was selling well. The range of cars offered in 1924 and 1925 remained relatively unchanged, with a gradual reduction in both options and prices. In this period all of the branded vehicles sold in Great Britain were bodied by H.H.H. It was a credit to De Dion Bouton that Omnia produced a short review comparing its specifications and performance with those of Bugatti and Alfa Romeo early in 1924, but most journals sought to comment on the relative merits of the different types of coachwork available.

In 1925, an attempt was made to boost sales by entering a Type IW 12/28 for the Brooklands races, with Dr J.D. Benjafield, one of the ‘Bentley Boys’, at the wheel. A suitable chassis with a higher axle-ratio was sent over from France, to which the Woodside Works added a two-seater body. A misunderstanding about piston clearances produced a top speed of no more than 117.8km/h (73.24mph), which did nothing to trouble the other cars on the track that day.

The Paris Salon in November 1926 was staged as normal and the De Dion Bouton stand had the usual glittering selection of complete cars and highly polished rolling chassis awaiting customer-specific coachwork. Amongst the vehicles was the new Type KS with quite the largest engine to be seen in a Puteaux chassis for some time with 95mm bore and 140mm stroke, and the successor of the Type JK initially launched at the end of 1923. The same power unit was in use for commercial vehicles until 1931. Whatever the expectations were for the 1927 season at this stage they very quickly evaporated in the New Year. Production ceased but finished vehicles were still offered for sale in France and Great Britain throughout that year and into the following year, without the introduction of any changes, other than steadily reducing sale prices.

Some interest in the British press, namely The Motor and The Autocar, was triggered at the end of 1928, when economic conditions in Europe showed some improvement, by the announcement that two new passenger vehicles were being prepared for 1929, one of which was the Type LB, an in-line eight cylinder of 2496cc. Priced from FFr62,000 to FFr95,000 depending on coachwork, it was an expensive item and a remarkable initiative given the parlous state of the company’s finances. The other vehicle prepared for 1929, the Type LA, was a 12hp, usually known as the 14-40, configured to comply with the British 14hp taxation category. By this stage, however, the British market was well-served by domestic manufacturers who could comfortably undercut imported machines on price; in any case, De Dion Bouton did not have a British agency in place to serve its interests, and so sales were probably minimal. For 1929, the company had five passenger models available, a number that was reduced to two for 1930 and 1931. Type Approval was sought in 1930 for two vehicles, the straight eight cylinder Type LX with an increased bore, and the four cylinder Type MA, the successor to the Type LA, albeit with a longer wheelbase, intended for taxi use. Any other changes were modest.

There was no presence at the Paris Salon in November 1931 or any press coverage on output. So many companies ceased production at this time that press coverage was centred on the survivors.